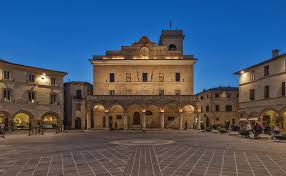 Famous for Sagrantino DOCG wine, Montefalco is one of the most beautiful villages of Italy.

All the main streets converging towards the large, circular shaped square, at one time known as the “Cavaliers’ square”. Mirrored in the square are the Town Hall (1270), the former church of St. Filippo Neri (1705) converted in 1895 into the Municipal Theatre, the small, very old church of St. Maria de Platea and the principle distinguished homes, that is to say the sixteenth century palaces of the Senili, Santi Gentili, Langeli and Camilli families. Let us follow the street leading from the square to the thirteenth century district of Colla Mora where lies the church of St. Francis, built together with the convent between 1336 and 1340, and full of works of art (it became the municipal museum in 1895), which include paintings from the end of the fourteenth century and above all, the scenes from the life of St. Francis and the chapel of St. Jerome, painted with great narrative and decorative ability in 1452 by Benozzo Gozzoli, pupil of Beato Angelico. At the bottom of this very same street, outside the walls, rose the Fortress which was demolished in the fifteenth century. Walk along the thirteenth-fourteenth century walls and you will come to the village of St. Leonardo where the church and convent of St. Clare rise. The first stone of the church was placed in 1303 thanks to the will of Clare of Montefalco, who was to die five years later. Nowadays, the church shows the seventeenth century modifications and reconstructions. However, the small chapel of St. Croce holds a precious cycle of frescoes portraying her life, which were painted shortly after the saint’s death (1333). These were painted by two anonymous, yet worthy Maestri. The frescoes by Francesco Melanzio (other works by this painter from various churches are kept in the Municipal museum) can be admired in the Church of the Illuminata (15th cent.) at the far end of the district. The fourteenth century village ends opposite of the little church at the convent of St. Leonard. Walking back up the “high street” (today called Corso Mameli) you come across the church of St. Augustine with its splendid gothic façade and its beautiful fifteenth century cloiste . This was built in the second half of the thirteenth century and contains interesting fourteenth-fifteent century frescoes by the Umbrian School. Further along are the Renaissance buildings belonging to the Pambuffetti and Tempestivi families. Our visit can come to an end with a final look at the mighty, well preserved. city wall (13th cent.). Worthy of note are the town gates, Porta Federico II (1244).