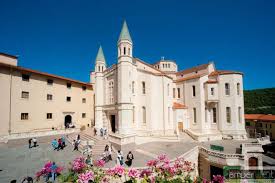 Located in the most mountainous part of Umbria, Cascia was founded in Roman times and lived the greatest splendor in the Middle Ages. Main attractions of the town are the Sanctuary Basilica and the Santa Rita Monastery, real religious centers of world renown. Then the Gothic church of San Francesco  and that of St. Augustine, to which there are wonderful examples of frescoes of the Umbrian school and Perugia; the church of St. Anthony Abbot, original of 15th century but restored and modified in the Baroque period, and inside presents a series of paintings on the history of the saint. Built in the Lombard period, the collegiate church of Santa Maria is probably the oldest building in the city, though, because of the damage reported in the earthquakes that have characterized the geologic history of these lands, has been significantly modified. Inside can be admired notable works of art such as the wooden crucifix of 15th century. Finally, Carli Palace, which with its interior is perhaps the most representative example of civil architecture of the city and Santi Palace, seat of the Museum, where you can find the suggestions that can offer the archaeological findings or refined forms of the wooden sculpture of the fourteenth and fifteenth centuries, of which the museum has a remarkable testimony.