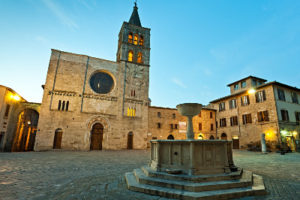 Bevagna, one of the most beautiful villages of Italy (http://www.borghipiubelliditalia.it/borghi), has preserved virtually intact its medieval urban structure, which for the most part follows the plan of the ancient Roman town. This pure solitude has made it a tangible symbol of a city on a human scale. One need only go to Piazza Silvestri, sublime in its irregularity, to understand how harmony can be created from an apparent chaos of styles, histories, and periods mixed together.This is one of the most magnificent piazzas in Italy. It is the square of sleeping memories, because the perennial changing of powers, which still confront each other here with their symbols, seems to subside in the supreme synthesis of beauty. The rule of the Commune is expressed in the Palazzo dei Consoli (1270), with its elegant travertine and sandstone façade, double rows of Gothic windows and the wide loggia (since 1886 it has been the home of the Teatro Torti, decorated by Bruschi and Piervittori). The three churches express the opposition of ecclesiastic power. The Church of San Michele (12th-13th cent.) has a travertine façade with horizontal coping, and inside there is a beautiful 15th-century crucifix. San Silvestro was built in the 12th century and has an unfinished façade of travertine blocks in the lower part and Mt. Subasio stone in the upper part. The strikingly simple interior is divided into a nave and two aisles by large columns with Corinthian capitals. The beautiful late 14thcentury portal of San Domenico (13th-14th cent.) adds grace to the asymmetrical square, which also takes in other styles such as the false Gothic of the 19th century fountain and the Roman column with a Corinthian capital, which seems to have been left there just for show. Actually, Roman columns and friezes can be found all over the town, because the houses are built over the remains from the 1st and 2nd centuries AD, following the curve of the theater which rested against the slope of the rise and faced the Via Flaminia. Remaining from the Imperial age are the side and rear façade of the temple and the frigidarium of the baths, formed by niches decorated with white and black mosaics, with a fine mosaic from the 2nd century AD with scenes from the sea. The city walls, with their many towers and bastions, are interrupted by medieval gates or more recent openings which allow access to the historic center. Inside, Bevagna shows its medieval character, where there is still a living craft tradition of workshops opening onto the char-ming narrow streets. After admiring Palazzo Lepri, built in the 1700s, it is once again the churches that reveal the mystic side of this village: Santa Maria in Laurenzia, today deconsecrated, has a fine portal with a relief of the Madonna del Latte; Santa Ma-ria della Consolazione is from the 1700s; the Church and Monastery of Santa Margherita holds interesting paintings, as does the Church of Sant’Agostino, established together with the original convent in 1336, with graceful and luminous frescoes from the 14th-16th centuries. Also, the Church and Monastery of Santa Maria del Monte; the Church of San Vincenzo, with Roman elements in its unfinished façade; the Church of San Francesco, with paintings by Dono Doni and Ascensidonio Spacca; the Church of San Filippo decorated with elegant stucco work and frescoes attributed to Domenico Valeri.